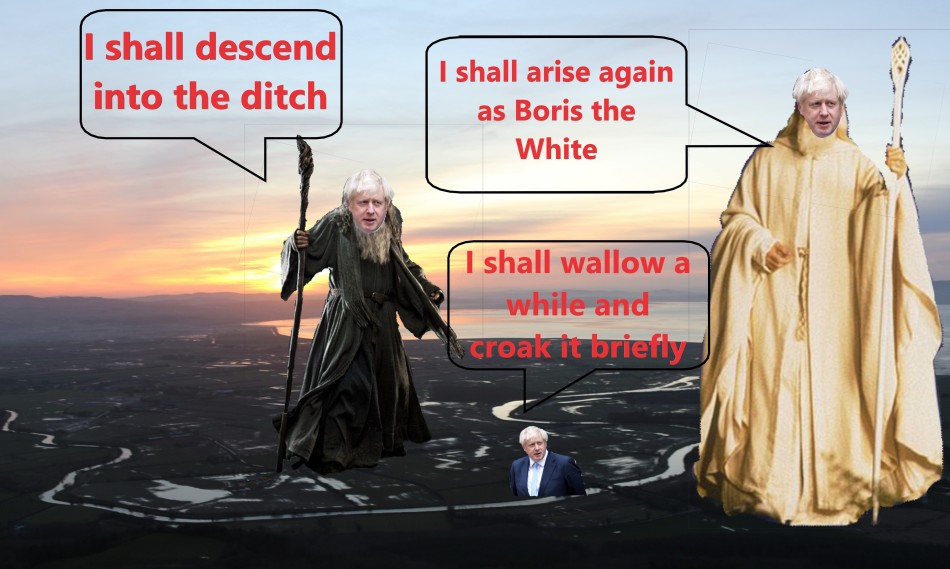 BORIS ‘The Grey’ Johnston will sink into the ditch and die at midnight this Thursday (Oct 31) and will re-emerge a few minutes later as Boris ‘The White’, TGL can exclusively reveal.

“I said I would be dead in a ditch if we weren’t out of the EU by Halloween and as a man of my word, I will be,” he told TGL.

“I shall descend into the ditch and die as I promised, but then my Gandalf like traits shall be apparent to all soon enough.

“Though in truth I fancy myself as more of a Frodo.”

Dismissing critics who have suggested that he is actually Sauron or maybe one of Donald Trump’s wraiths, Mr Johnson said that this rebirth was the ultimate in ‘Shite or Bust’ politics.

“I was Boris the Grey and I concede some of my policy areas were grey, but that will change when I arise from the ditch reborn as Boris the White.

“Clarity of a sort not seen in British politics for centuries will emerge with me.

“I will lead the United Kingdom of Great Britain and the parts of Northern Ireland that aren’t in the EU customs union out of the EU.

“Then, when Brexit is done, opinion polls won’t mean a damn and my Shite or Bust Brexit strategy will been a total success!” he concluded.

0 comments on “PM Lord of the Rings rebirth imminent: Boris to be reborn in a ditch with uncanny new powers ‘I am not Sauron, I am Gandalf’ he declares – ‘or maybe Frodo’”